One of the cool projects I've worked on this summer was this Ionic Thruster. After seeing the original idea on Make Magazine by Alexander Reifsnyder, I was amazed to see it work so I decided to build my own version! 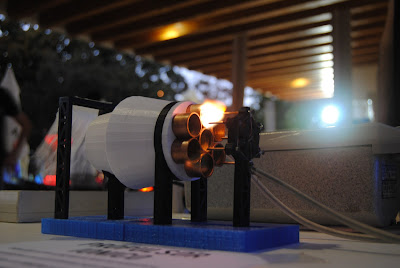 To make use of the tools I had available I decided to build the entire structure using 3D printing. This way not only would be a more simple build but it would also be easily replicable. I already did a full article about this project on eLab Hackerspace's blog, but I'm going to summarize it here anyway. 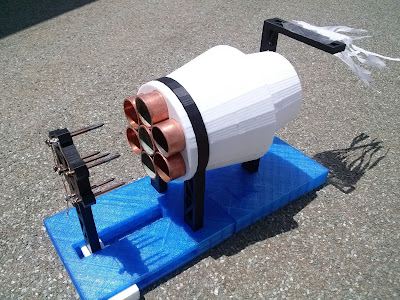 First I started by designing the structure on Tinkercad. It basically consists of 4 parts, the copper tubes support in the middle, the nails support on the back, the flyer support at the front, and the base where they all fit on the bottom. This was my first sketch: 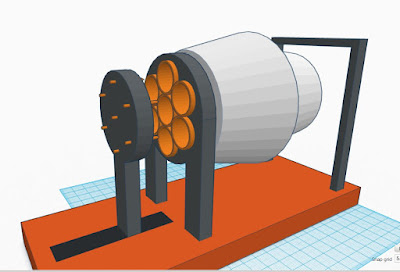 I made sure all parts fit on a 20x20mm printer bed so that most 3D printer would be able to print this model. The parts are available for download on Thingiverse. 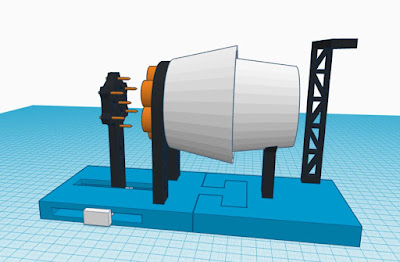 The construction itself is quite simple, all you need is the electrodes (copper pipes and nails) and a high voltage power source, like an NST (Neon Sign Transformer) like the one I used on the Tesla Coil. I also added a push button to activate the thruster:

It is suggested however that the nails are copper plated to increase conductivity. To do this, I've followed a very simple instructable which only uses some old oxidised copper coins, salt and lemon juice or vinegar. So, I grabbed some iron nails and cleaned them up with a wire wool to remove any oxidation and then put them into the solution, one at a time: 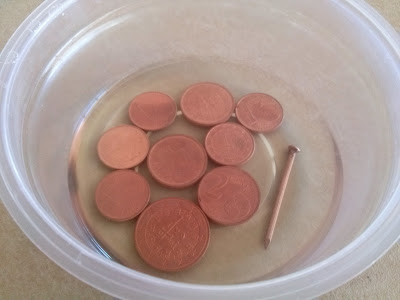 During the process you might need to replace the coins, because this works with oxidised coins. After a while they will loose that layer of oxidation and the process stops working. It’s also a good idea to add more lemon juice or vinegar and salt every once in a while.

After all parts were printed, cut all the pipes the same size, and had the copper plated nails ready, it was time for a first test:
Pretty amazing! But how does it work? Well the nails will be one electrode and the copper pipes the other electrode. The high electric field around the nails will ionize the surrounding air, which means it will become electrically charged and will be attracted by the opposite electrode, the pipes. This will create almost invisible tiny beams of plasma. As the ions reach the tubes, the charges will be attracted to them but the neutral particles already gained momentum, creating a steady flow of air. 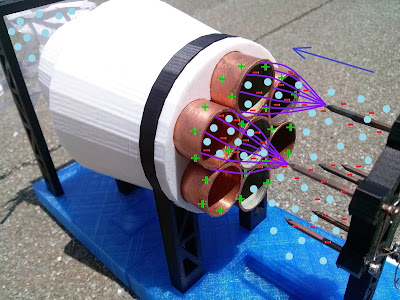 Here is the final assembly:
But this project isn’t exactly an efficient engine though, is more of a scientific demonstration of the ion thruster working principle. That said, it won’t launch of the table but it will create a steady flow of air without using any moving parts, which is interesting. 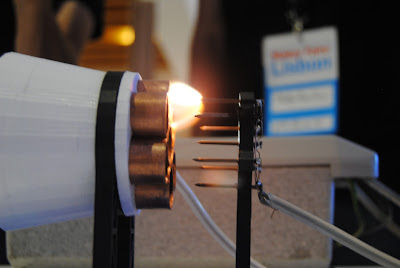 However in space there is no air to ionize, so this project as it is, wouldn’t work. But this technology is already being used in space probes, so what's the difference? Well in space it’s injected a noble gas like xenon, keeping the spacecrafts from using solid fuel, making this method more efficient and more appropriate for longer travels. But the working principle is still the same! 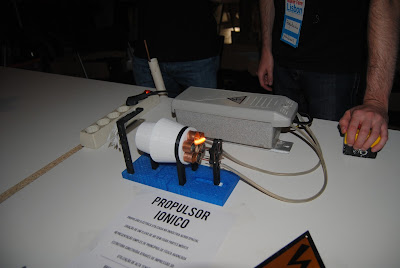 I had the opportunity to take this project to Lisbon Maker Faire 2015 which got quite the attention of the visitors. It was also awarded there as the "Best in Class" of Science!