A few months ago I was browsing online through some 3D models for 3D printing and I noticed there was some DNA strands that caught my attention. They looked nice, however they were not really ready for 3D printing, at least for most printers. Still, I was moving them around on the browser and I realized they created an amazing upwards and downwards effect when rotating them. I thought, if it looked that nice on my computer screen, it must be even more hypnotizing if it actually existed. Then this thought came to my mind: what if I would print a DNA strand, and put it over a rotating platform and make it a lamp? And thus, the idea for this project was born. 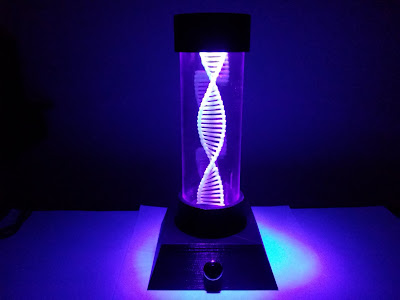 It was a good time to have this idea because, coincidently there was 3D printing contest happening on Instructables with some really nice prizes, so I thought about entering the contest with this project. Since I published a fully detailed tutorial of the entire project on Instructables, I won't get into details here. The files are available for download at My Mini Factory. If you're not into DIY you can just get one on Tindie.

Despite being a spontaneous idea, this actually turned out to be one of my most successful projects of all time, getting over 34 000 views! Fortunately I finished it in time for the contest and it was actually one of the winners, for which I was awarded a Think3DPrint3D Kossel Mini 3D Printer Kit! 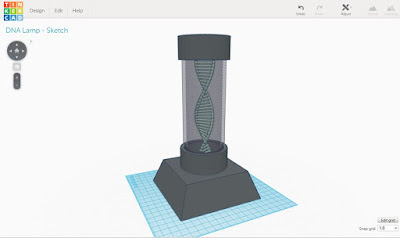 As it happens, it got so much attention that it was even featured on websites like 3Dprint.com, 3ders.org and even Hackaday, among others.

Don’t forget to check the Instructables article for a complete and detailed tutorial on how to build it!

Update: If you're interested in buying one, you can get it on Tindie.